Veterinary Guidelines For Handling and Treatment of Werewolves 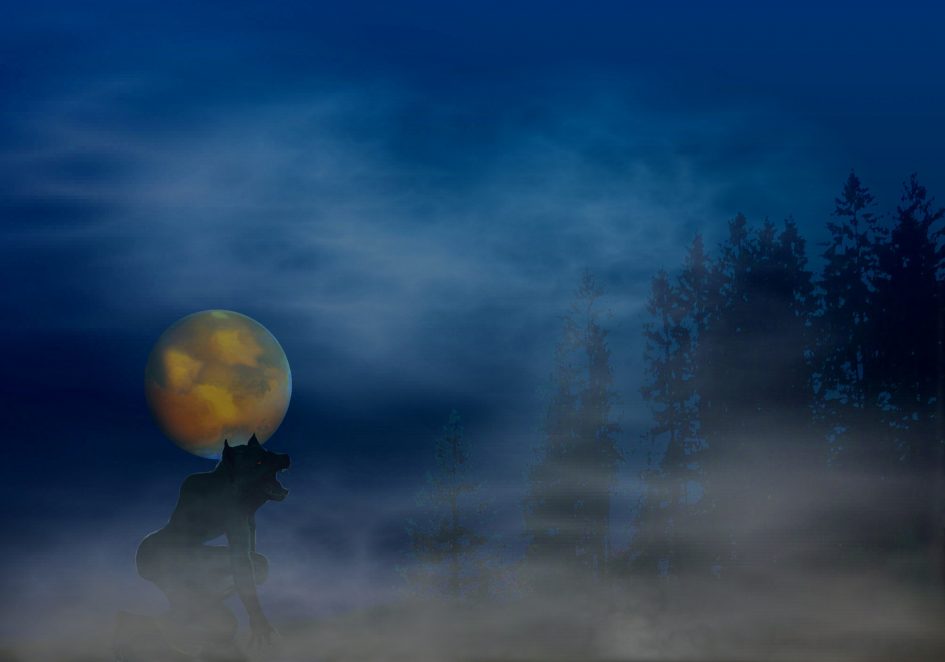 Hopefully it hasn’t slipped your notice that this year Halloween falls on a full moon. For those of you who are working through this weekend, especially nights, I thought I would write some summarised guidelines if you happen to be presented with this rare creature, the Werewolf.

As it is full-moon, during the hours of darkness you can expect your patient to be presented in their wolf-like form, though some may be in partial transition especially at dawn and dusk. The transformation is generally uncontrollable excepting some that can reportedly transform at will. At all other times the werewolf will appear human in all ways though it may get some increasingly wolf-like behavioural characteristics in the days leading up to the transformation, or have a liking for raw meat. There is an unsubstantiated report of a surgeon who, on the days preceding a full moon, would lick the wounds he created before colleagues could step in. In the days after the full moon, the human may appear pale and lethargic due to the draining effect of the transformation, or have gastrointestinal issues due to meat consumption during the wolf stage. A werewolf near the transition periods may show an adverse skin reaction to contact with silver cutlery although not EPNS so care should be taken when declaring a negative result to this test that the owner/partner is being truthful about the quality of their tableware

Werewolves have some characteristics of wolves but there are distinctions too and some variability in appearance, with some more wolf-like and some less so, with some suggestion that this may be due to different subspecies of werewolf; this is yet to be substantiated. They have some or all of the following characteristics – a wolf-like muzzle of mesocephalic shape containing prominent long canines, elongated ears that stand erect (without human mutilation), an excess of hair all over head, body and limbs (which may be black, brown or grey), walking on all fours though the paws may retain some hand-like characteristics. They can generally be physically differentiated from true wolves by the shorter muzzle, smaller pupils and the ultimate telling sign, a short bushy tail or complete absence of a tail. Werewolves appear to be predominately male, but it is not known if this a sampling bias as the female is likely wiser and better at hiding in the transformed phase than the males; further research is needed in this area.

When in the wolf state, werewolves are aggressive, hunt out humans as prey and will readily kill a human that they would otherwise recognise unless it is a mate, having lost sense of right and wrong. However, once successfully transformed back to human form most have some memories of what happened in the preceding night.

There is little published research on the anatomy and physiology of werewolves and there are no complete and authenticated skeletons in existence on which to base our understanding. It is therefore suggested that the characteristics of wolves are used for when the werewolf is in wolf-like form and human attributes when in human form. No published references ranges for haematology or biochemistry could be found (PubMed search October 2020). Werewolves are fully mortal but are reportedly more resilient and durable with exceptional strength, stamina and endurance and some suggestion of enhanced healing capacities.

Werewolves are thought to mainly reproduce through asexual reproduction by transmission of the curse by biting non-werewolves. There are some unsubstantiated accounts of sexual reproduction between two werewolves that leads to a short gestation and the birth of wolf cubs which may stay in wolf form permanently or revert to human form at a later age (J.K.Rowling, Wizarding World 2015). Under no circumstances should you buy a large, black puppy with soulful eyes from somebody in a white van that says it is rescue from Romania, shortly after the time of the full moon since finding them a school place in later years may prove difficult, even if they are microchipped.

You may be called to visit away from the practice as a discovered werewolf is likely to be very aggressive and appearing wolf or dog like, human companions or the emergency services may instantly assess the need for the attendance of a vet. Given the size, strength and aggressiveness of a werewolf, it is unlikely that the finder would be able to bring the animal to the practice, and if they weren’t already mortally injured by it. This is not a bad thing because as vets, we are used to dealing with angry, aggressive animals and have multi-species experience in anatomy, medicine and surgery, plus access to a wide range of drugs. If you feel that the treatment of such a creature would be beyond your knowledge and capabilities and while following the advice of the RCVS on the requirements to provide emergency treatment to any species of animal that cannot be safely brought to the practice (3.9  A veterinary surgeon on duty should not unreasonably refuse to facilitate the provision of first aid and pain relief for all other species until such time as a more appropriate emergency veterinary service accepts responsibility for the animal.), you may wish to try to refer the caller to your friendly exotics or zoo vet, especially if they are used to dealing with wolves or large cats.

When considering if the animal presented is a true werewolf or not, the following differential diagnosis should be considered and ruled out if necessary.

The transformation process is very painful therefore this may increase the aggressive nature of the werewolf. It is only ethical that an animal found in pain has its pain relieved. It is likely that opiod analgesics have a suitable effect, used at dose higher than for a wolf due to the unique physiology of werewolves. Once pain is assessed (Keir facial pain recognition score for werewolves) and treated, then a plan needs to be made for how to safely deal with the werewolf. Options include:

There is no permanent cure available to stop a werewolf from transforming into the wolf form or cures the curse permanently but as most of the month the werewolf behaves and acts almost entirely like a human, is it ethical to consider curing these of their ‘disease’?

Health and safety for veterinary staff

Veterinary staff must avoid getting bitten at all costs. Leather gauntlets should be accessorised with leather corsets for the ladies and a full length leather trench coat for the men; these afford protection and a professional appearance when dealing with werewolves. The largest of dog muzzles you have in the practice may fit a werewolf but there is no practical way of fitting one to a live werewolf. Cages that are large enough to contain a fierce and strong an animal and ideally contain them against the bars for injection are ideal – the closest I have seen have been large cat handing facilities that may be found in zoos and safari parks. For the first aid of werewolf wounds, silver dressings or silver sulfadiazine cream (Flamazine) should be applied as soon as possible as there is anecdotal evidence of efficacy in preventing transmission.

As can be seen from these guidelines, there is much we still need to understand about werewolves to identify their unique anatomy and physiology and therefore optimise their treatment. This, however, should not deter veterinary staff in considering the handling and treatment of these animals if the need arises and undertaking full health and safety considerations.