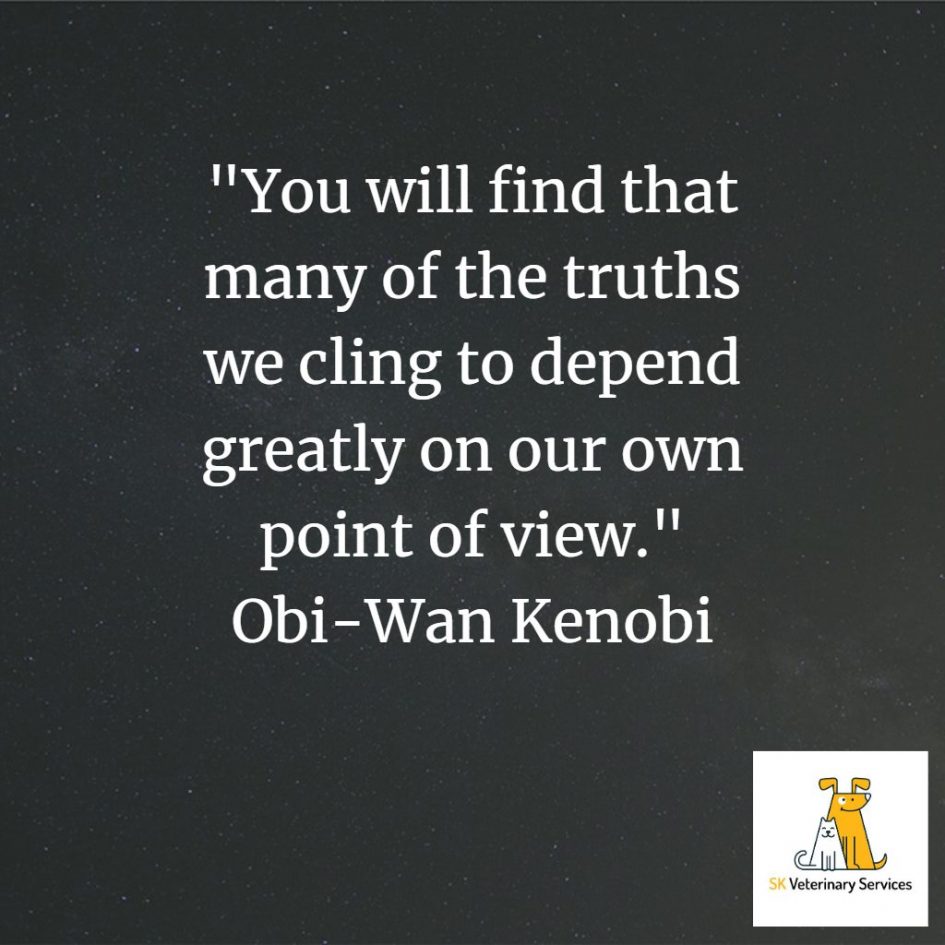 After my husband’s previous article on the power of stories I thought it would be good to share a couple with you.

A young but slightly disillusioned vet is sent to work in a branch practice in a town in middle of nowhere; they’ve never been before. They are a locum so not going to stay in this place for long, only until a better offer comes along. On the diary for the day is a surgery for the removal of a mass on a dog’s leg (let’s call it Scooby) and when the vet sees this mass he knows that the very best thing for a mass that might be cancerous is to know what the lump is first. Having this information will allow him to plan the surgery with margins, or to give the option of referral for advanced treatment if he is unable to provide such treatments in this practice. The information he needs to be confident that the surgery is the best option for the dog is not in the case notes. Therefore, instead of doing the planned surgery to remove the mass he discusses his plan with the owner and they go away to think about it.

The vet is young and with vet school still fresh in his memory, he knows that the very best thing for a dog with a mass is to offer the best treatment option as the first option; anything less than this would be a compromise. He had been stung by situations in previous jobs where he had been pressured into working in ways that emphasised time or money over quality. This didn’t fit with his vision of vetting and by now working as a locum, he was only answerable to himself and the RCVS in how he conducted his work.

Under the circumstances, he felt that he had done the only right thing by pausing to gather the information he needed before performing what may be unnecessary, or potentially even damaging, surgery.

The clinic director of a busy country town practice felt overworked and overwhelmed, needing to take on extra responsibilities within the practice when the other clinical director retired without being replaced. The practice needed urgently to recruit, this task also fell to her, yet her time was so stretched as it was. At least the recruitment agent had sent her a locum vet to fill in some of the rota gaps and judging from the locum’s CV they should more than easily be able to cope with some sole-charge sessions at the branch practice.

The first the clinic director knew that there were any issues was when a complaint letter from the owner of Scooby landed in her inbox. Great, another problem to solve on this endless line of problems, she thought. When she read Scooby’s owner’s letter she completely sympathised – Scooby had been booked in to get this worrisome lump removed and he came home with the lump still on him and a plan from a strange, young-looking vet that involved the owner spending more money. Mrs Scooby wasn’t happy, and neither was the clinic director. What was the locum playing at? She had hired him as a functioning vet and yet he had turned away a very simple procedure that was the biggest work from the day.

Two sides to every story

Last year I was privileged to serendipitously become the guardian of two diametrically opposite versions of an event. This is a true story told to me in separate times and places by the two people involved, neither of whom had any reason to think I knew the other party; I have altered some details to anonymise the people involved. I deliberately don’t say ‘sides’ as I don’t actually know which one is ‘correct’ as I wasn’t there in person; these are second-hand accounts. But it is telling how the version of the story from these opposite accounts is coloured by the biases and opinions of the one telling the story. In hindsight, and with the luxury of seeing both perspectives, it’s very easy to believe that both stories are true; neither one has anything which contradicts the other.

As was alluded to in the last article, stories have great power but none so much as the ones we tell ourselves about a situation. This is the colour that our internal biases give to the reality playing out in front of us. This has the power to alter “reality” itself, and yet most of the time we are not aware of it and its effect. I hope in by recounting these stories, I can show you the importance of considering why someone seems to have behaved the way they did and the importance of considering perspectives.

What did you see in these two versions? What would you have done, both as the locum and as the clinic director?

Having seen both versions of the event we can see that there is still no clear right or wrong, and this is often the way in many of the decisions we need to make on a daily basis. Getting comfortable with the grey area between two diametrically opposite possibilities is something that is very important to be able to function as a vet and to enjoy your daily work. More of this later….