Trust in the Workplace – Part 1 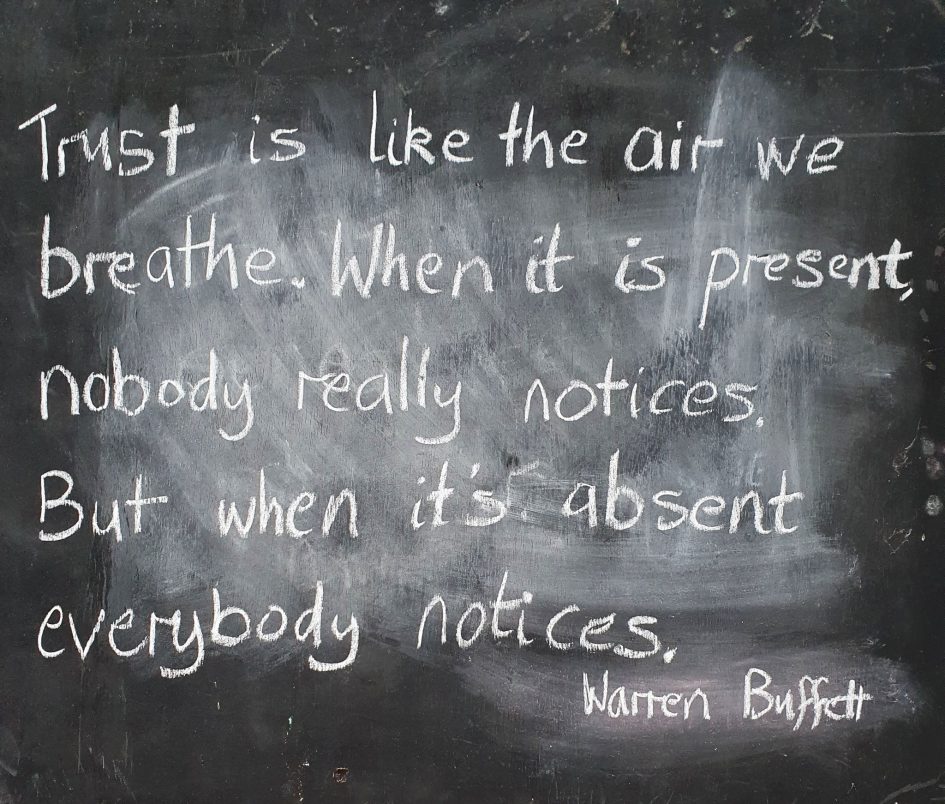 I’m sure I’m not alone in having difficulty in describing what trust is – it is just too big, complex and vague. Trust is essential in healthy relationships, vital for connection in the social human species, in both workplaces and personal relationships. Yet, despite its essential nature in all types of relationships, trust is one of the key factors I’ve found lacking in a number of veterinary practices with negative ramifications such as defensive practices clinically and non-clinically (read more here), disengagement from the job, low cooperation in teams, suspicion and doubt causing anxiety and stress all the way to outright competition and fear. Unsurprisingly all lead to reduced outcomes personally and clinically, reduced productivity and retainment issues. Could improving the lack of trust in workplaces play a part in repairing the professions current issues?

Trust. So what is it?

I like Charles Feltman’s description of trust – trust is choosing to risk making something you value vulnerable to someone else’s actions. For this to happen there needs to be some safety in the relationship and this is what trust boils down to – it is the belief that someone will hold you in safety with what you share with them. It is not just a feeling or emotion; it is a cognitive assessment that has been shown to be rationalised through visible actions i.e. the behaviours that we see. Trust has a biological basis – it is formed when oxytocin is produced. However, high stress is an oxytocin inhibitor and veterinary practices are frequently high stress workplaces.

The best analogy for trust I have come across is described by Brené Brown as the marble jar; building trust is putting a marble in the jar for that relationship but when trust is broken then large handfuls of marbles are removed, or potentially even the jar is broken. Like a bank, for a relationship to have trust you need to make frequent deposits in order to make withdrawals and getting overdrawn is just not an option in this bank. No credit is given.

Generally, trust takes a long time to create, slowly, bit by bit; it is not yes or no, or on or off. Yet it can so easily be destroyed and very quickly, sometimes even without the person realising what they have done. Also, once trust is broken it is almost impossible to be remade as some form of betrayal has happened, a very deep and painful emotion. Some relationships start with an amount of assumed trust e.g. a new employee starting a job, but these are also the times that the trust is most fragile. Trust is the bedrock for leadership, teamwork and engaged people, but there is often little thought put into how it should be created and kept alive.

The emotion of trust

Trust is not an emotion itself but when someone questions our trustworthiness we feel it emotionally and it sets up our vulnerability lockdown in motion – we put up shields, put on armour and defences are on high alert. When trust is missing in a relationship, we spend much more energy and time in the assessment of threats and survival mode. This emotional survival mode stems from our limbic system – the responses are reflexes – because connection and social is key to human survival. Trust is a feeling not an instruction; you cannot tell someone they can trust you (this is directly for my last boss). That’s up to them to decide through your behaviours, actions and language towards them.

It is often harder to tell when trust is present than when it isn’t. We need to look for tangible, visible behaviours to assess its presence but often we don’t realise what we are seeing or experiencing is trust or some form of anti-trust. Some things can be quite obvious to see but some are much more subtle and we only see them for what they are by reflection or if they are pointed out to us by a third party. It is easier to see anti-trust than trust as it quickly leads to working in fear and shame, causing intense emotions that we feel as ‘gut-feelings’. These things are as true in personal relationships as professional ones. I believe anti-trust is the hallmark of a toxic culture; though there are many other causes of toxic cultures, I believe that the lack of trust is the most important by far.

There isn’t a direct word for the lack trust so I’m using anti-trust to describe when trust is absent – it covers mistrust, distrust, and betrayal, but can be much smaller and more subtle. What follows are some examples of anti-trust that I have seen and sometimes experienced in veterinary practices. I hope this list will be of use to raise awareness of identifying anti-trust in your personal and work relationships. This is useful if you need to assess a team that you might be working with (as employee, locum or coming in as a leader) but also by recognising anti-trust, you will be able to identify what will get in the way of building trust.

Anti-trust examples in the veterinary profession:

Sadly, a good number of these points seem to be the way veterinary management is/was taught and are widespread in the profession. However, workplaces ignore trust issues at the expense of performance and success of their employees and hence their business. If there is no trust then there is no connection and that is bad for work that is a team game like veterinary care.

What have you seen or experienced in regard to anti-trust? Do any of these ring true for you? It was a whole lot easier for me to write this first part than the next part on building trust as sadly it is all too common to see and experience anti-trust in the veterinary profession; part 2 will look at how to build trust.